Doshi levien (nipa doshi and jonathan levien) has conceived a set of storage cabinets that resemble the improvised dwellings fundamentally found in developing countries across the globe. london studio’s ‘shanty’ storage units for BD barcelona feature monochromatic or colorful corrugated patchworks on their façades, disguising rationally and carefully considered volumes within for hiding belongings. the ‘shanty’ collection of furniture is being presented at the 2014 salone del mobile.

‘shanty’ derives its name and appearance from the improvised dwellings found primarily in developing countries.

The Shanty cabinet hides a rational storage system behind a seemingly random series of panels that is inspired by the design variation found in informal settlements, where corrugated iron is used to create unique dwellings and colour combinations that change as they fade over time.

“A lot of people think that these improvised structures are ugly, that they have negative connotations,” Nipa Doshi told Dezeen. “We really like the beauty of the improvised.”

Corrugated iron is often seen as a cheap material in the west, but takes on a new value to residents in these homes said the designers. “To [the people who build these homes] this is a prestigious material,” explained Doshi.

The lacquered MDF cabinet features extruded aluminium legs and is set to be the first piece from a bigger collection that BD Barcelona will produce in the next year.

It is available in two different configurations – one with three shallow drawers on the right hand side which can be finished in multiple colours or shade of grey. The other has a concertina-opening cabinet.

The collection is a continuation of Doshi Levien’s aesthetic, which seeks to combine a European approach to industrial design with a strong interest in handcraft and a “way of looking at the world that is not so pure,” said Doshi. 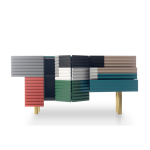 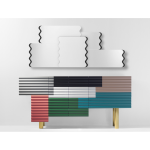 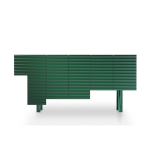 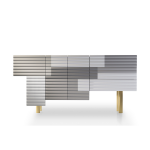 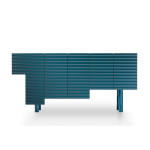 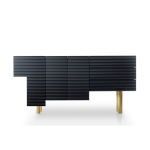 The familiar object was reappropriated by Morrison in 2006 to[...]

The Wave wall-mounted system is the result of the designer’s[...]

Kooky and tropical, yet fully functional the Cabana is a[...]